Personal Humidor
Bestellung & Versand
Actions
About us
You are here:HomepageShopCigarsDominican RepublicDavidoffLimited Editions 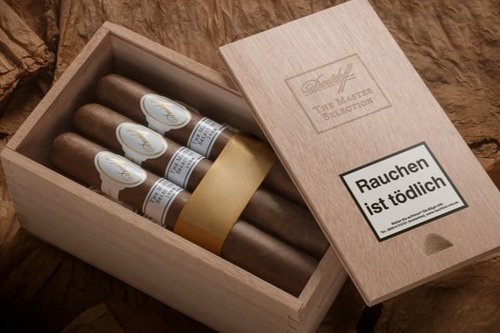 This year’s Davidoff Limited Edition was born under six favourable stars. That is because it owes its intense, harmonious bouquet of aromas to no fewer than six superior tobaccos. The blend was especially matched to the Robusto Intenso format used for this limited-edition premium cigar. It consists of Piloto, Olor, San Vicente and Havana Seed Criollo tobacco varieties.

The first star for full-bodied aroma
The Havana Seed Criollo used for the Davidoff Limited Edition 2005 is cultivated in a special growing region north of Santo Domingo, in fertile, red-coloured soil. Three years of storage allow the tobacco to mature fully. For the Criollo, leaves from the middle part of the tobacco plant are selected. The Criollo lends the Davidoff Limited Edition an intense, full-bodied, aromatic taste that lingers long on the palate.

Star número two lends intensity
The second star of this year’s Davidoff Limited Edition is dedicated to the Piloto filler tobacco. This tobacco variety is grown in an exclusive location in the Valle del Yaque, specially fermented and then stored for five years. This enables it to develop powerful aromas that have an exceptionally stimulating effect on the tastebuds.

Complexity comes with the third star
A unique tobacco from Jicomé ensures complex smoking pleasure: this fine San Vicente filler tobacco from the upper leaves of the plant (Ligero) is similarly able to develop its aromas through an additional fermentation and a five-year period in store.

From Mao: a star for sweet and sour
This San Vicente tobacco, grown on a slightly acid soil and then matured for a total of four years, comes from Mao and enriches the latest Davidoff composition with sweet and sour notes.

Four stars enveloped by a fifth
The fifth star stands for the binder and is contributed by the Olor tobacco variety. This tobacco owes its slightly sweet character to a special fermentation process and to four years in store.

Star number 6 goes to the elegant wrapper
The wrapper is grown especially for Davidoff in Ecuador and stands out for its full-bodied flavour which is due to a double fermentation and a three-year maturation.

Six well-earned stars for a majestic format: Robusto Intenso
The wealth of aromas in this year’s Davidoff Limited Edition can be enjoyed to their best advantage in the Robusto format chosen. The short, voluminous shape with a 52 ring gauge is a true hallmark of this cigar. The term “Intenso” reflects the character of the full-bodied, extrovert smoking pleasure that aficionados will experience with the Davidoff 2005 special edition.

Stars in little wooden boxes
The Davidoff Limited Edition 2005 Robusto Intenso come in specially varnished and sealed wooden boxes of 10, of which no more than 10,000 will be available worldwide. A booklet is enclosed with each box, informing interested cigar enthusiasts about the origin and composition of this exquisite speciality from the House of Davidoff.